Attorney General Leslie Rutledge announced Thursday (Oct. 7) that Arkansas’ allocation of a $216 million opioid settlement will be split evenly between cities, counties and the state.

A signed Arkansas Opioids Memorandum of Understanding (MOU) clarifies the settlement being paid by opioid manufacturers and distributors.

“By bringing the cities, counties and state together, all Arkansas communities will have access to funds for the prevention, education, and treatment of opioid use,” said Rutledge. “Far too many Arkansans have felt the impact of the opioid epidemic. Our MOU will help save lives through education and treatment of those battling addiction across Arkansas.”

The MOU breaks down the allocation of funds for each party. The state of Arkansas will repay any Medicaid funds from its allocated share and counsel for the state will be paid by the state.

Arkansas joined the national opioid settlement with the distributors and Johnson & Johnson in September, setting the stage for the cities and counties to join by January 2, 2022. The settlement agreement includes Cardinal, McKesson, and AmerisourceBergen – the nation’s three major pharmaceutical distributors – and Johnson & Johnson, which manufactured and marketed opioids. 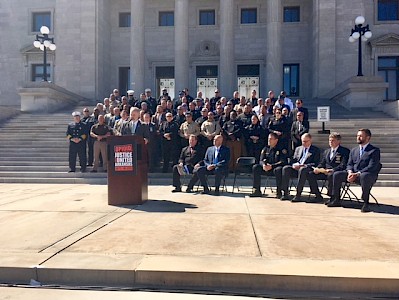 Watch video from the news conference announcing the lawsuit.

Opioid Crisis: Is Arkansas Paving the way for big pharma, not taxpayers, to pay for addiction? — Newsweek Online

The opioid epidemic: A crisis years in the making — The New York Times 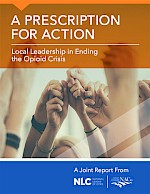 A Prescription for Action: Local Leadership in Ending the Opioid Crisis

This joint report from National Association of Counties (NACo) and the National League of Cities (NLC) examines how cities and counties can strengthen collaboration with each other and state, federal, private-sector and non-profit partners to tackle the opioid crisis. Several of the recommendations are accompanied by existing local practices from cities and counties. The report also includes recommendations for state and federal officials, who are pivotal partners in local efforts to combat opioid misuse, diversion, overdose and death.

Centers for Disease Control and Prevention