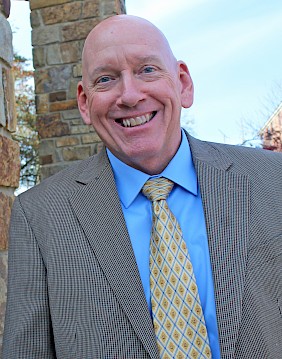 Michael Roys became familiar with the Association of Arkansas Counties (AAC) over a decade ago while working for Arkansas Tech University. At the time, he was working as the director of the Professional Development Institute at the campus, and he worked with the Arkansas Collectors Association for their training sessions. Years later, as the newly hired ACE Program Coordinator, Roys had the opportunity to again work with the Arkansas Collectors Association, as his first day at the office was also the second day of the association’s Fall/Winter meeting. He said he hopes to harken back to his Tech days as he now will be responsible for coordinating continuing education for all of the associations for elected officials.

Roys is currently working alongside current program coordinator Karan Skarda, who is retiring at the end of the year.

While on a bike ride, Roys received a call he never thought he would receive. AAC Executive Director Chris Villines approached him about the ACE Program Coordinator position since Villines remembered Roys from his time working with the collectors.

“In the years around 2008 to 2010, I was president of the Arkansas Collectors Association, and Michael worked as our liaison with Arkansas Tech University. Our meetings were always organized and Michael was very personable and easy to work with,” Villines explained.

Prior to joining AAC, Roys worked for 12 years as a middle school teacher in the Russellville School District. He taught language arts and geography.

Roys said the job offer “checked all of the boxes of things that I still am interested in doing and passionate about.” He said he also feels his position at the AAC aligns with his goals of helping others as a servant leader, and he is looking forward to serving the elected officials in any way that he can.

In his new position, Roys wants to help the various associations provide meaningful trainings, so that elected officials can be the best they can be.

“I’m really excited about that,” he said. “I want them to leave the meetings, taking back information to make their counties even better.”

He mentioned that he knows the elected officials are working hard and under a lot of stress. He hopes through continued trainings they can learn new things to make their jobs easier, less stressful, more efficient and more fun.

Roys has his own experience serving as an elected official. He was elected to the city council in Russellville for two terms.

Looking to the upcoming year, Roys said he has big shoes to fill after the retirement of Skarda, but he is looking forward to connecting with elected officials across the state, establishing relationships with them and facilitating “some really good quality meetings.”

“Hiring Michael to replace Karan is like a baseball player hitting back-to-back home runs. We are lucky to have had both of them tied into the ACE Program,” Villines said.

Roys said that in his time with the AAC, he has enjoyed the vibe of the office. All the staff has been nice, helpful, and supportive, he said.

In his free time, Roys is an avid outdoorsman, and he enjoys climbing, mountain biking and paddleboarding. He also serves as the coach for the Cyclone Mountain Bike Team.

Roys is the proud father of daughter, Grace. She and her husband, Sawyer, have two sons: Ridge, 5, and Drew, 7 months.