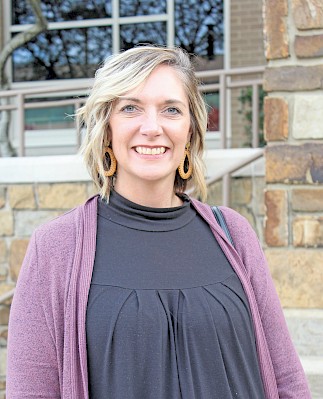 Coming to work at the Association of Arkansas Counties, Misty Petrus said she feels like she is back with family just at a different home. Having worked at the Arkansas Municipal League (ARML) for 16 years, Petrus is excited to get back to the government side of the Worker’s Compensation field.

“Although I don’t know all the ins and outs of the AAC, I have a feeling that the setup is likely very similar [to that of the Arkansas Municipal League],” she said.

After graduating from Lonoke High School in 1996, Petrus jumped into the Worker’s Comp arena at the ARML. She started working in clerical support and over her 16 years there, she made her way up the ladder until she became a senior adjuster. At the beginning of her career at the ARML, Petrus worked under Sheryll Lipscomb, who became a mentor.

“She mentored me and over time I fell in love with what I was doing,” she said.

Petrus then worked for a broker briefly before joining the staff at Cannon Cochran Management Services, Inc. She has worked in management for the past five years.

“I have grown up in the Worker’s Compensation industry. It’s what I live and breathe and what I know,” she said.

Petrus was recently hired to step in the role of Worker’s Compensation claims manager at AAC following the retirement of Debbie Lakey, who Petrus has known for years.

“We travel in the same group. We go to the same conferences. We attend the same events, so we know each other … It’s a small pond when you have been doing it for this long,” she said, adding that she also serves alongside Lakey on the Arkansas Self Insurance Association (ASIA) Board.

She learned of Lakey’s retirement and that the position at AAC would be available through ASIA.

Petrus said she is under some pressure coming in after Lakey.

“I’m sure that she is extremely loved by everyone that she works with and deals with. There is some nervousness, but I am also extremely excited to have people who trust me enough to be able to take that on,” she said.

Petrus knows that Lakey has done an amazing job over the years and hopes to continue with the wonderful things she has done, but she is also looking forward to putting a fresh set of eyes on the job.

She hopes that maybe with a new spin on things, she may be able to make things even better.

“Ultimately, I’m going to be a good steward of the counties’ money,” she said.

Petrus said she is excited about learning everything that her new job will entail and meeting the people she will be working with in the office and across the state. She wants people to feel comfortable with her as she learns how and where she can help people with their needs. Petrus said she plans to work for AAC until she retires.

Petrus has three adult children and they all live out-of-state. Lexi is an attorney in Florida. Marcus lives in Utah, and Aly works at a public relations firm in Chicago.

Petrus, a resident of North Little Rock, describes herself as “Dogtown proud.” She lives in a historic home that she is restoring with her husband, Wes. They have two dogs, Juno and Spanner.