Mississippi County Courthouse gets a facelift 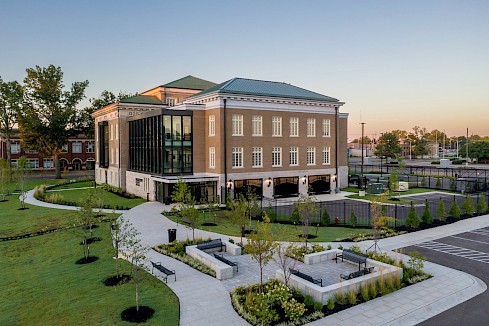 The Mississippi County Courthouse in Blytheville has been part of the framework of the community for more than 100 years and thanks to a recent project, the historical building will continue to be a resource for many years to come.

The project, which has been in the works for years, involved the restoration of the courthouse, along with the construction of additional square footage at the space.

Mississippi County Judge John Alan Nelson said the goal of the project was to create a museum-grade facility that can also be used by the community. Since the project’s completion, Nelson said he has only heard compliments and praise about the courthouse. He said pictures of the building do not do it justice.

When asked why the decision was made to renovate the historic building instead of constructing a new courthouse, Nelson said he feels historical buildings are an important resource for communities. The architectural elements of the building, such as the elaborate marble and limestone, also could not be recreated at a new courthouse.

“This endeavor will be a landmark in the history of Mississippi County. Preserving our past pays tribute to those who have come before us and leaves a message to those who follow. We take on this tremendous responsibility with highest respect. The citizens of our county have entrusted us with their hard-earned money to make those decisions that will prove to carry this project to a successful completion we can all be proud of,” Nelson said in a press release about the bond for the renovation.

The county bond totaled about $18 million, with $2 million going to improvements to the county’s second courthouse in Osceola. Since the Blytheville project came in under budget, the remaining funds will be used to make more improvements in Osceola, Nelson said.

Aaron Ruby, founder and firm principal with Revival Architecture, said his firm became involved in the project after submitting a request for qualifications prior to the COVID-19 pandemic. The staff at the firm in Scott specialize in the restoration of historic properties, and they especially enjoy working on county courthouses.

Historic properties have unique limitations that are not involved in projects with modern buildings or new construction.

Ruby noted that historic buildings usually are not built to accommodate modern conveniences such as heating and air conditioning, so space is limited for ductwork and other equipment. Insulation is also usually not in place within the building walls.

The Mississippi County Courthouse, a Colonial Revival style building, was constructed between 1919 and 1921. It was listed on the National Register of Historic Places in 1996.

According to the registration information filed with the U.S. Department of Interior, the courthouse was designed by the Selligman and Ellesvard architectural firm in Pine Bluff.

With this project, Ruby said his team was tasked with adding as much square footage as possible within the county’s budget.

“A lot of work went into something like this,” he said.

The addition had to match the style, look and the location of the floors within the historic courthouse.

“While clearly discernible from the original courthouse, the compatible addition makes use of similar materials and features while remaining subservient to the original, taller and more substantial courthouse. The use of glass at the new public entrance provides a level of transparency important in government buildings,” according to the project description by Revival Architecture.

During the restoration, Ruby said he also had the opportunity to display older records and other pieces of the county’s history at the building.

Nelson said he liked that the county had the opportunity to display some of those historic records. A crew currently is working on a display to honor the county’s veterans, especially a World War II hero and Medal of Honor recipient who is entombed on the courthouse campus.

Nelson said his favorite aspect of the project was the restoration of the original courtroom. He called this space “ornate” and the hub of the courthouse.

As part of the project, the staff at Revival Architecture and Renaissance Roofing also made some improvements to the county’s second courthouse in Osceola, including replacing the copper dome at the top of the courthouse.

“After careful study and evaluation, and years of maintenance and repeated ‘repair’ projects, it was determined the copper cladding of the dome required full replacement,” according to the architectural firm’s description of the project.

For their work on both courthouses, the staff at Revival Architecture has received various awards including being recognized by the Copper Development Association.