Continue to ‘Back the Blue’

Many important pieces of legislation have been adopted by the General Assembly, but more can be done to aid law enforcement officers.

In 2020, Gov. Asa Hutchinson created the Task Force to Advance the State of Law Enforcement in Arkansas. The Law Enforcement Task Force was designed with a two-pronged purpose. First, the task force was developed to identify the best methods for the recruitment, training, and retention of law enforcement officers in the state. Additionally, the task force was designed to provide insight and guidance on increasing trust between law enforcement and communities in Arkansas, while also recommending changes to improve policing.

Act 778 started as SB346 and was sponsored by Sen. Jason Rapert and Rep. Rick Beck. SB346 was designed to provide uniformity and clarity to the law concerning body camera retention, the use of audio and visual media for law enforcement, and Freedom of Information Act (FOIA) requests. Under Act 778, criminal investigation documentation, audio, video, and audiovisual media are given specific retention periods. Law enforcement and detention centers are also encouraged to use audio, visual, and audiovisual media. Furthermore, clear guidelines were established for FOIA requests related to electronic records and law enforcement.

SB292 was the beginning of Act 786, sponsored by Sen. Jason Rapert and Rep. Danny Watson. Act 786 establishes the Public Safety Equipment Grant Fund, which is to be managed by the Arkansas Department of Public Safety. The Secretary of the Department of Public Safety is given the power to grant money to local law enforcement to be used to provide equipment that is non-lethal and that contributes to greater transparency and communication between law enforcement agencies, detention centers, or corrections agencies and communities in Arkansas. These grants can be used for equipment, training, and accreditation. Act 786 does not establish a line of funding for the grants and relies on surplus funding to be allocated to the grant fund.

Act 946 is rooted in SB300, which was sponsored by Sen. Jonathan Dismang and Rep. Keith Slape. SB300 was drafted to address the current violent crime rate. According to a study conducted by financial news and opinion company 24/7 Wall Street, Arkansas has one of the highest violent crime rates in the nation with 543.6 violent crimes per 100,000 people. Additionally, Arkansas ranks as the fourth most dangerous state in the United States. Act 946 is designed to address this issue by narrowing and prohibiting parole for certain offenses. Act 946 expands on the crimes and re-offenses for which parole is prohibited to include those with a prior felony conviction who are prohibited from possessing a firearm and who unlawfully use a firearm to commit a violent offense.

Act 765, sponsored by Sen. Missy Irvin and Rep. Mark Berry, began as HB1360 and established the Law Enforcement Relief Trust Fund. The Law Enforcement Relief Trust Fund will be used to provide financial assistance to the families of certified Arkansas law enforcement officers who were killed in the line of duty or diagnosed with a terminal illness by a medical professional. This fund will be used to help provide relief to their financial hardship. The fund will be supported by individual taxpayers who designate all or a portion of their income tax refund to be withheld and paid into the fund.

While the General Assembly made great strides in supporting our law enforcement, progress remains to be made in a few key areas. Bills to address these needs were filed. However, they unfortunately were not passed by the General Assembly. These needs should be a priority for future legislative sessions and should be addressed by legislative action. This fall, lawmakers will return to the Arkansas State Capitol to address redistricting. At this time, we believe the Governor will call a special session to address potential income tax cuts and tax proposals. This presents an opportune time to show our support for Arkansas law enforcement by passing those bills that did not reach the Governor’s desk for later this year.

SB304 was sponsored by Sen. Jason Rapert and Rep. Keith Slape. SB304 was written to provide an income tax credit for certain law enforcement officers. This tax credit is desperately needed, as Arkansas ranks 49th in mean annual wages for law enforcement and 45th in the recent “Best State to Be a Cop” rankings. Additionally, data from Career Explorer identifies the average starting pay for police officers in Arkansas to be barely above that of a minimum wage worker, averaging around $23,129 per year. This is despite Arkansas facing the 47th highest violent-crime rate in the nation and being the fourth most dangerous state in the United States.

SB304 did not become law this session and was recommended for study by the Senate Interim Committee on Revenue and Tax. Upon return of lawmakers this Fall, enacting this tax credit should be a priority. This tax credit offers many benefits, including providing economic security for law enforcement working in one of the lowest paying states and promoting both retention and future recruitment.

The General Assembly has recently indicated support for similar proposals. For example, HB1513 was passed by the General Assembly with unanimous support. Sponsored by Rep. Jon Eubanks and Sen. Jonathan Dismang, HB1513 establishes a maximum tax credit of $3,500 for retired law enforcement officers who work cold cases for the Division of Arkansas State Police. If a retired law enforcement officer works at least 1,000 hours investigating one or more cold cases, they may claim the full $3,500 tax credit. Those retired law enforcement officers who spend less than 1,000 hours investigating one or more cold cases qualify for a prorated tax credit reflecting the number of hours worked investigating one or more cold cases. Tax credits are given to those who apply for an eligibility certificate on a “first come first serve” basis and a limited total amount of $25,000 can be awarded by the Division of Arkansas State Police each fiscal year.

HB1513 received 96 votes in the House and 34 votes in the Senate. Upon signing, HB1513 became Arkansas law as Act 841. There was unanimous consensus among legislators that Act 841 is expected to provide appreciation and support for retired law enforcement who continue to selflessly serve Arkansans, while doing so with minimal fiscal impact. With such widespread support for Act 841, there is no reason SB304 establishing tax credits for full-time law enforcement officers should not become Arkansas law. 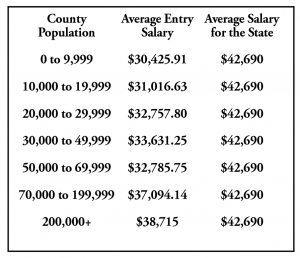 The average entry level salary for law enforcement in each different county classification is as follows:

These findings have led the task force to recommend increasing entry level salaries for law enforcement officers to a minimum level of pay that is at least equal to the average salary in Arkansas, phasing in salary increases for officers to match their service history, rank, and responsibilities; and providing income tax deductions for full-time law enforcement officers. All of these policy recommendations should be taken into great consideration by all levels of government and implemented as soon as possible.

Another solution to help “Back the Blue,” would be the passing of an income tax credit for full-time law enforcement officers. The benefits of such a proposal are numerous, including raising the yearly disposable income of our officers and their families. This is needed as entry level county law enforcement officers in counties of every size fall well below the average salary in Arkansas and as officers in Arkansas continue to be paid at a mean wage that is among the lowest in the United States. As mentioned, this tax credit was proposed in the latest legislative session yet failed. The upcoming session this fall would be an opportune time to implement this policy.

County Judge Jimmy Hart from Conway County and the Conway County Quorum Court have adopted an ordinance for premium or hazard pay for county employees and law enforcement. Judge Hart noted, “Premium pay helps us to compensate our folks and do what other entities have done to show our appreciation for what they have endured.”

These recommended policies would assist law enforcement, while offering numerous benefits for law enforcement agencies, the public, and officers themselves. For instance, the most cited challenge in recruiting new officers was found to low salaries, with 89.2 percent of respondents indicating this barrier. Similarly, low salary was the most cited explanation for difficulty in officer retainment, with this issue being indicated by 95.9 percent of respondents.

Despite working one of the most dangerous jobs in the nation for low pay and lacking benefits, our law enforcement officers in Arkansas courageously continue to wear the badge every day. While great strides supporting police were made in the most recent meeting of the General Assembly, much needed progress remains. The upcoming special session and the budgets of counties should prioritize law enforcement and their standard of living across the State of Arkansas.

Best & Worst States to Be a Police Officer (https://wallethub.com/edu/best-states-to-be-a-cop/34669)

Dangerous states: Which states have the highest rates of violent crime and most murders? (https://www.usatoday.com/story/money/2020/01/13/most-dangerous-states-in-america-violent-crime-murder-rate/40968963/)